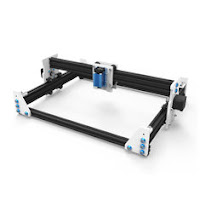 My latest toy is the Eleksmaker A3X laser engraver. While building it, I found the provided drive belt clamps didn't work, and I came up a better method of fastening them. 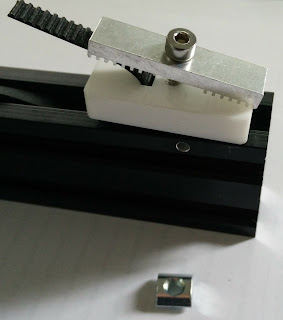 The A3X kit comes with six belt clamps where the belt comes up through a slot in the white plastic block. This is trapped by the aluminium fitting via a bolt that should screw into a captive nut in the rail.

Unfortunately the bolt is not long enough to engage the captive nut, so I had to figure out another way to fasten the belt. I was happy to do this because I didn't like the way the belt was bent 90 degrees around sharp corners, and also that this arrangement was quite long which limits the movement of the laser carriage.

To tension it, you only need to adjust one end of the drive belt so the other end can be fixed. To do this, I drilled two 3mm holes and inserted two 3mm pins (actually a sawn-off nail) and a captive nut like this: 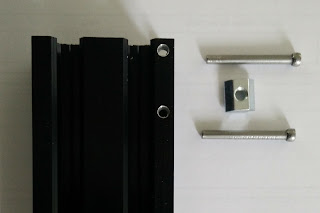 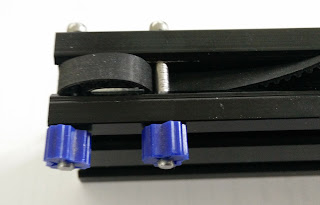 UPDATE: I've now changed the fixed end to use cable ties. I wrap the belt back on itself so the teeth mesh, and use two cable ties. This only needs one hole/pin.

I drilled another 3mm hole about 12mm from the end of the rail, and put a 3mm pin in it. I then cut down the white plastic block and drilled and tapped two threaded holes for the bolts. I cut off the end of the aluminium clamp fitting and filed two semicircles into it like this: 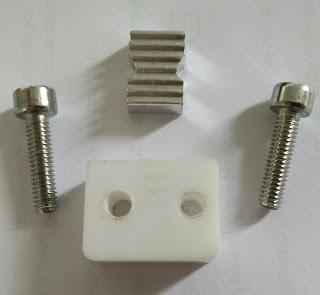 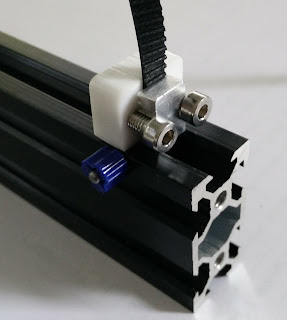 UPDATE: The clamp above is not ideal because it's hard to tighten the belt. To access the bolts, you  have to removing the rail from the endplate.

I now have a 3D printer, so I printed up these: 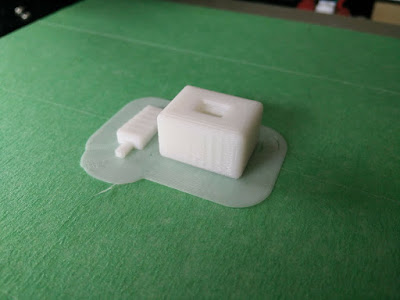 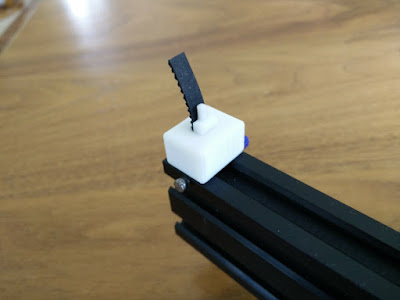 The block has internal teeth, and the wedge holds the belt teeth against them for a positive grip. To tighten the belt, pull out the wedge, pull the belt up another tooth, and reinsert the wedge. No bolts to fiddle with!

It also only takes only 12mm of the end of your extrusion, so increasing the travel of your laser head.

You can download the STL file for 3D printers from Thingiverse.

So now I have: