The Cascade Saddle track has a reputation of being one of New Zealand's harder walks, compensated with awe-inspiring views over the Matukituki valley, Mount Aspiring and the Dart Glacier. Who could resist?

My 16-year old sons Olly and Jasper are Venture Scouts, and part of their Chief Scout Award involves planning and carrying out a journey. They organised to take three days off their holiday jobs, but as the time came closer the weather forecast narrowed down our options. Luckily the Cascade Saddle was a possibility - I had wanted to do this walk for years, and the boys eventually succumbed to my arguments.

So as soon as Olly got off work on Wednesday 26th January, we loaded up the truck with our gear and set off - in pouring rain. It's about two hours drive from our home in Arrowtown to Raspberry Creek, and Nicole ensured our undying love by dropping us off - then driving all the way back again. After having my shorts licked by a cow as I did up my boots (a good omen?), we set off in showers to walk the two easy hours up to Aspiring hut. Arriving just before dark, we made some hot chocolate in this prince of mountain huts, chatted to a group of Dunedin Sea Scouts, and bunked down ready for the big day.

Day One
We were woken at 6:30 by raucous keas, only to find they had taken to Jasper's orthotic insoles. Luckily they were still mostly intact, and we were glad to see the weather had cleared according to plan. After a quick breakfast we set off at about 7:30.

The day was broken into four main sections: a steep climb from Aspiring Hut to the pylon; across Cascade Creek to the viewpoint;  descending alongside the Dart Glacier to the valley floor; and a flat walk along the valley to Dart Hut. 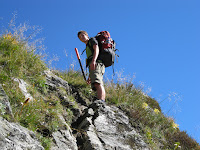 The first section was a killer. The track was very steep, with frequent large steps that soon had my legs screaming. The boys... not so much. It became obvious that they were far fitter than I, stopping every few minutes to let their decrepit father catch up. We broke out of the bush after about two hours, getting stunning views of the Matukituki Valley and Mount Aspiring. Unfortunately the track got even steeper, and the tales of injuries and deaths on this section seemed only too credible. Steep bluffs were everywhere, and a stumble could easily be disastrous.

The boys scampered on like mountain goats, and I toiled after them. The GPS was useful, mainly for the altitude readout - we paused for a few minutes after every hundred metres we gained. Eventually we crested the last bluff, the track mercifully levelled off, and we reached the pylon. At just over 1800m, we'd climbed 1400m in just over four hours. We munched some scroggin, and took in the incredible views - Raspberry creek was still in view, far below us, as was Aspiring Hut. Across the valley we could just make out French Ridge Hut, and we started plotting a visit. Above the hut stood Mount Aspiring cloaked in glaciers. 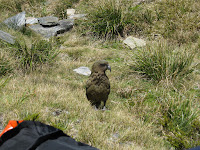 We then started to walk down a far more reasonable gradient to Cascade Creek. This runs through a delightful valley with snow grass meadows - maybe it was the euphoria of reaching the top, but it seemed to me to be absolutely idyllic. We reached the viewpoint after an hour, and settled in a small sheltered spot to wolf our lunch - fruit loaf with camembert! We took an hour to enjoy views from the precipitous edge, and laze in the sun under the watchful eye of a Kea. 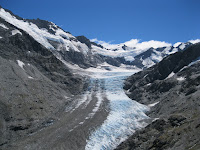 After recharging our batteries, we set off down to the Dart Valley. Jasper's toes started to get painful in his cheap boots, but truly magnificent views of the Dart Glacier helped distract us. "Awesome" is overused these days, but that's what the glacier was. From the unblemished snow around the peaks, it ran down until the ice started cracking across the glacier as it rode over a lip of rock far beneath. Then longitudinal crevices appear as it is forced to turn a right angle by the Dart Valley, all the while picking up more and more shattered rocks from the valley sides. The tail is so encrusted with debris that it doesn't seem to be ice at all. We reached the tail after about an hour's walk down fairly loose rock on the south side of the valley.

As often happens, the last section was the hardest, despite being pretty much flat. We had put on sun-screen when we left the bushline that morning, but because we hadn't brought enough, we didn't apply more. The sun was hot, there was no breeze and the raw rock we were walking over reflected the heat straight back at us. Jasper's toes were very sore by this stage, so none of us really enjoyed the experience at this stage. 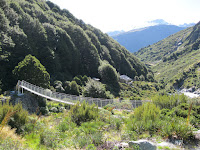 Which was a shame - it was almost like walking through time. At the glacier tail, no life existed and the valley was bare raw rock. But as we travelled down, mosses and small spruts of grass started appearing; then grass became thicker, and bush started appearing; and when we reached the hut 2.5 hours later, we were in mature beech forest.

We were all relieved - Jasper's boots came off in a flash, and we stumbled down to the river for a wash. The cold water was heavenly on our necks, arms and legs, and we realised how burnt we all were. All up we'd taken ten hours and ten minutes to get from Aspiring Hut to Dart Hut, including a good three-quarters of an hour idling at the viewpoint.

That evening was a bit of a blur - we rustled up some macaroni cheese with sliced cabanossi sticks, wolfed a pottle of mango on top of creamed rice, and hit the sack.

Day Two
After a solid night's sleep, we cooked porridge on the trusty coke-can cooker, and packed ready for the rain that was forecast. It was overcast as we set off, and after a hour it started drizzling. We marched on, through alternating beech forest and grassy flats, and the rain got stronger. My gaiters had kept my boots dry through all the streams the day before, but I stupidly didn't put them on when we started out. My boots got soaked just from brushing past the grass on the flats, and putting them on halfway along closed the stable door after the horse had bolted. 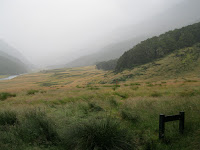 We didn't feel like stopping in the rain for lunch and so pushed on to Daley's Flat, arriving about 1:30pm. Despite the rain, the warden was busy with earthworks remodelling the path around the hut. It was a mud bath, and the voracious sandflies made it even less appealing to spend any time outside.

We had a leisurely lunch of soup,  ryveta, cream cheese and sun-dried tomatoes. Then an afternoon snooze as the rain poured down, not waking till late afternoon. Dinner was dehydrated something (who can tell!) and a bar of chocolate. Jasper and Olly played werewolves (a version of mafia) with the rest of the hut inhabitants, then we went off for another good night's sleep. 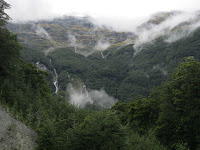 We woke to find the rain had stopped, and after porridge packed for the last time and rushed out the door to avoid the swarms of sandflies in the porch. The lunch we knew Nicole was bringing in was a constant driver keeping us moving, and we covered the ground at a good pace. Although it had stopped raining, the low cloud obscured Mount Earnslaw to our left. The track was similar to the previous day, with bush sections around bluffs followed by grassy flats.

And before we know it we were skirting Chinaman's Bluff, seeing parked cars through the trees, and sure enough there was Nicole waiting patiently for us. It was lovely to see her, and even lovelier to see the fine feed she had brought with her - bacon and egg pie and a potato salad!

It was a good trip. Apart from Jasper's toes and sunburn all round, we had no injuries, and my knees handled the climb and descent without a murmur. We got the weather right, doing the potentially dangerous Cascade Saddle on the one fine day we got. We learned not to leave orthotic insoles anywhere keas can get at them, and apart from Olly's mug cracking, our gear performed well. The boys did a sterling job of organising and executing the walk, and I was proud to have such capable companions for this unforgettable adventure.
Posted by Unknown at 1:19 AM